Burr and Burton Academy
founded in 1829 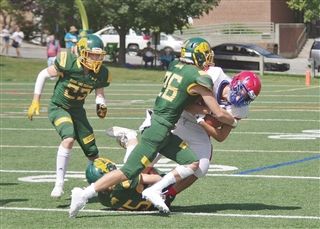 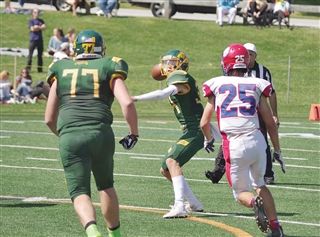 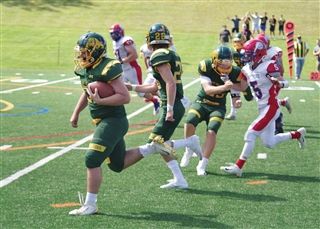 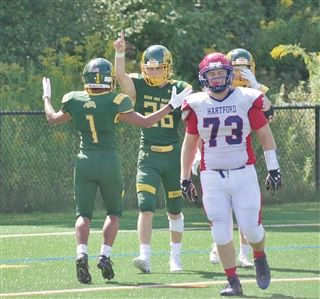 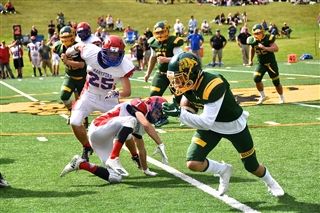 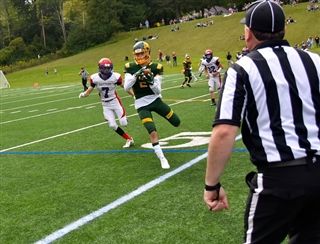 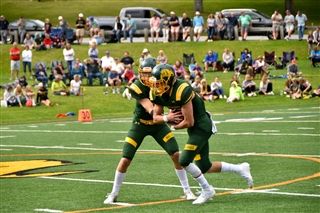 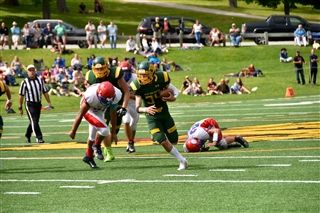 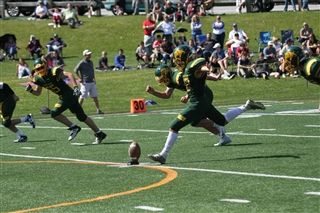 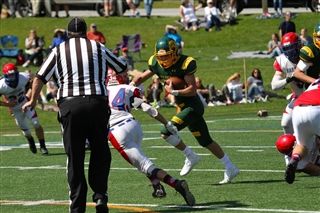 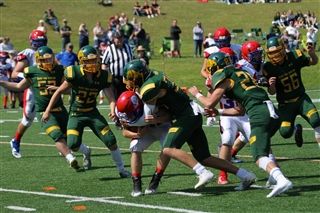 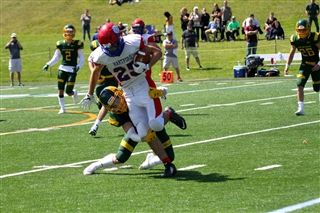 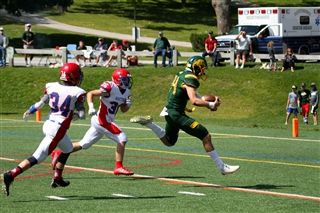 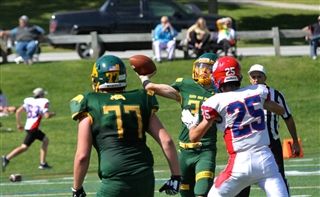 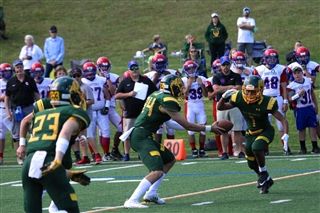 Posted Sunday, September 8, 2019 8:45 pm
By Adam Samrov, Bennington Banner
MANCHESTER — It wouldn't seem likely that a play on defense would be the turning point in a game that featured 77 points combined, but it was the momentum-shifting play that the Burr and Burton football team needed. Junior linebacker Patrick Szkutak returned an interception 30 yards for a pick-six in the second quarter, giving BBA a lead it never relinquished in a 48-29 win over Hartford. "I saw run first, but then dropped back [on the pass]," Szkutak said. "It felt [like] slow-[motion], I just ran to the end zone and then the whole team came to celebrate." BBA quarterback Joey McCoy got the Bulldogs on the board first with a 16-yard quarterback draw before Kobe Peach cut the lead in half with a 33-yard field goal.
After a 3-and-out from the Bulldogs, Hartford went on a 92-yard drive that took 13 plays and almost six minutes before Cole Shambo broke out for a 24-yard touchdown run and a 10-6 lead. Burr and Burton came back immediately on the next possession, taking advantage of a pass interference call before McCoy hit Logan Morgan for a 32-yard touchdown pass over a pair of Hartford defenders to make it 13-10. On Hartford's next drive, quarterback Cole Jasmin had third-and-5 at his own 24. He threw to Kyle Hamilton, but McCoy and Hamilton got to the ball at the same time. When the two fell to the turf, the ball popped up into the air and Szkutak grabbed it and ran it back. "They were wrestling for the ball, and I just grabbed it and saw green grass in front of me," Szkutak said. First-year BBA coach Tom McCoy said he was fortunate a play like that went the Bulldogs' way. "Sometimes it's better to be lucky then good," McCoy said. "He made a great play. We tell the defense to fly to the ball and good things will happen." Burr and Burton started to establish itself in the second half. On the opening possession, Hartford was knocked backward on a unsportsmanlike penalty, which forced them to punt on fourth-and-31. The snap went high over the punter's head and Hartford recovered but it was BBA's ball on their side of the field. "I thought we played well on special teams," McCoy said. "There's three facets of the game, offense, defense and special teams and we work hard on all three." Starting at the 28 yard line, Logan Morgan found a seam in the defense and scored his second touchdown overall on the day to make it 27-10. As a team, the Bulldogs rushed for 190 yards, led by McCoy with 82 yards. "I'm happy with our offensive line, we have a couple of sophomores and Ethan [Simonds] is a senior at center," Tom McCoy said. "We wanted to run the football and I think we did a nice job of it." Hartford took advantage of BBA playing man coverage on the next possession, as Jasmin found Jacob Dwinell for a 91-yard touchdown to slice the lead to 27-16. But BBA effectively salted the game away with touchdowns on the next two possessions — the first an 11-yard touchdown run by Morgan and the second a 29-yard TD jaunt from Will Moore. "I'm proud of the defense, we had to get two new defensive ends and two inside linebackers this year," McCoy said. "I'm proud of what we were able to accomplish with our pass rush and covering the backs out of the backfield." Jasmin and Peach hooked up two more times for touchdowns in the fourth quarter before Moore scored on an eight-yard touchdown with 3:37 to go. "At the top end, we played man coverage all day, so breakdowns will happen every so often. Burr and Burton will travel to Colchester on Friday night in a battle of 2-0 teams. "We prepare for games really well, our scout team really helps out in practice to give us a good look," Szkutak said.
Back

Offering every student a world of opportunities.